Qualities of a Good Rifle Safe:

1. Weight: If you had to rely on one feature of a safe, and one feature only, it comes to determining whether it’s the best rifle safe, it would be the weight. The weight of a safe reveals a lot about its quality because it reflects how much steel went into making them safe, and, generally speaking, the more steel, the heavier the safe, and the harder it will be to break into the safe. Certainly, the heavier the safe, the harder it is to walk off with it.

Think about it: if two safes cost the same, and one weighs more than the other, that means that one manufacturer invested more money into building that safe. They have put more quality into the construction. So, as I said, when analyzing a safe, I always start with the weight.

You’d be quite shocked at how this one single factor holds up in practice. Have you ever seen a rifle safe on sale in a big box store, like a CostCo? Cheap, right? They have you thinking that it’s because Big Box Co. buys in large volumes, that they can give you the same product cheaper than other makes.

Think again. I can tell you that every time I’ve analyzed and reviewed a rifle safe advertised at a big box store, it was basically a tin can. Hey, from the outside all gun safes pretty much look alike. And it’s kind of appalling that some of the well-known brands will put out a cheap piece of garbage with their name on it, give it a unique model number that’s “Exclusive” to Big Box Co., then sucker buyers into taking it home.

Now, it’s not exactly easy to compare the weights of two rifle safes. For one thing, there’s no official area measure for what makes, say a 16-gun safe. Brand X’s 16 gun safe might be the same size as brand A’s 12 gun safe, so you can’t go off of that, not at all.

You have to go back to basic algebra. Hmmm…or is it geometry? Oh well, whatever it is, you have to look at the measurements of the safe, and they have to be very close in order to accurately compare two models.

Once you have two similarly sized models, then you can compare the weights. If there’s a significant difference, then start leaning toward the heavier rifle safe.

2. Fire Rating: The next thing to look at is the fire rating. I don’t think that fire rating is a big deal in and of itself, as long as the rifle safe has a half-hour rating from one of the reputable rating agencies, that should be more than enough. However, if you’re comparing two safes, and one is a half-hour and the other is one hour, then the fire rating means something-it means that there’s more quality in the higher-rated safe. All things being equal, that’s an edge.

3. Paint Job: Hey, I know I want a nice design and paint job for MY rifle safe. Some brands have really beautiful looking designs, some, not so much. You can tell by the design just how much effort went into it, and that’s a reflection of quality.

4. Finally, when comparing safes, don’t forget to make sure you’re comparing the same lock types. You really can’t compare an electronic lock with a combination, when trying to look at value. Well, at least you should not forget to account for it.

So, back to the original question-what are the best rifle safes on sale today? Well, my recommended gun safe is the Winchester Ranger or Winchester Silverado gun safes. Quite simply, they are the top-rated gun safes: they weigh significantly more than comparable safes, they have a higher fire rating than similarly priced models, and they’ve got some great paint jobs. This one is an easy choice. By the way, here is my Winchester Ranger gun safe review, where I do an actual comparison of the Ranger vs a comparatively priced and sized Liberty gun safe. 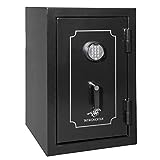 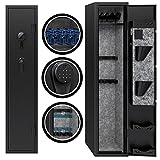 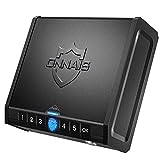 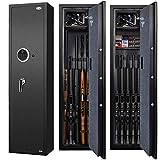 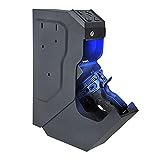